Where Does Fufu Come From 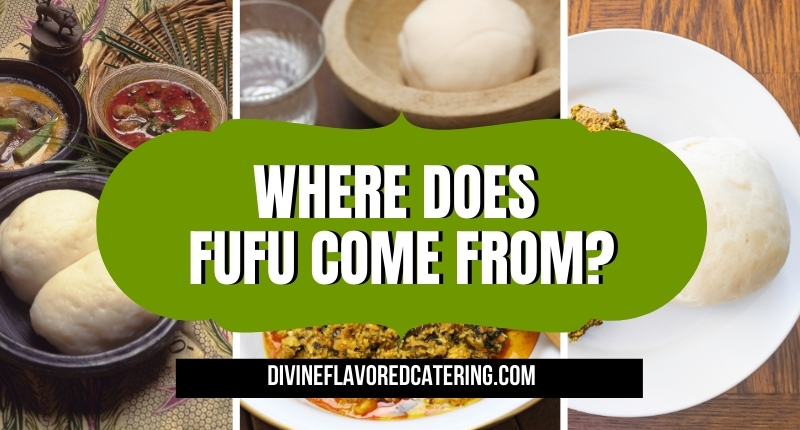 Food oftentimes leads us into a memory lane as we reminisce about the past as we take a bite and savor the taste of the food. The new craze over fufu in the  TikTok challenge is bringing back the taste of the food that has been part of African history and its memories. Fufu may be a silent witness of the African culture and the strength of African women in making the dough of fufu.

The word “fufu” is part of the Twi language, which is widely spoken both in Ghana and the Ivory Coast, and it means “mash” or “mix.” It is mashed or mixed with the use of mortar with a pestle. Fufu became part of the African dish after cassava was introduced by the Portuguese in the 16th century.

Making the dough of this food is not that easy, although there could be the availability of food processor however the machine processed dough of fufu is far different from the smoothness of the dough which was manually made by hand. Eating fufu is eating and savoring the labor of love of the hands that manually made the fufu dough is smooth perfection.

The slightly sour, spongy dough is made from pounding the boiled starchy food crops like cassava, yam, and plantains. Countries in Africa have come out with different versions of fufu, such as in the country of Nigeria, Cameroon, Togo, Benin, and Sierra Leone.

Fufu had been the staple food for most parts of the western part of Africa. In fact, Ghana’s Ashanti people proudly muses that “A man has not eaten a day unless he has eaten fufu.” This food is part of their daily menu, and it perfect when paired with native African soups such as nkrakra (light soup), nkate nkwan (groundnut soup), abenkwan (palm nut soup, abun abun (green vegetable soup), and other soups.

Eventually, the taste of fufu was brought to America during the period of the slave trade. Those Africans that were brought to America as slaves had brought with them the tradition of making fufu and eventually adapted new recipes from the available raw materials. Eventually, countries like the Dominican Republic, Haiti, Puerto Rico, and Cuba had adapted fufu with their own versions of doing it. They mashed sweet plantains with butter, animal fat, and lard to make the dough.

The current craze for fufu will go to show the fusion of traditional food of fufu and social media had relived the past. It may also relieve some wounded past, such as some American had made some disgusting TikTok about the food that traces its roots from Africa. There might be some feelings of indignation that may have been felt by the African-American community, but still, the fact remains that fufu had been part of their lives.

This is the food that should not be snubbed or be receiving backlash, for it is a product of hard work. Those who had actually made the dough of fufu manually may understand what is meant by “hard work” in doing the dough.

Fufu dough is being done in a traditional way by pounding it with a mortar and pestle, and usually, it is being done by women. The strong pounding being made by the women is the one that breaks the fiber of the starchy food. Gradually add water to the mixture while tossing it, whipping, and turning the mixture until the smoothness of the dough is achieved. The dough is smooth and sticky and will be shaped into a “ball” that appears to be “bake,” but it is not being baked.

You will enjoy eating fresh fufu by complementing it with spicy soup and felt it as it slides down into your throat. The pain and effort of making the fufu are indeed worth it.

You may raise an eyebrow, for pounding the starchy food to smooth perfection entails time and a lot of sweat-pounding action, and you don’t have the liberty of time to do it. Modernity makes everything easier, and with the advent of a food processor and the invention of the Fufu machine, making fufu nowadays is just a matter of click. The preparation for fufu had been made easier in order to meet the growing demands for a large-scale production of restaurants and chop bars. Not to amiss the fact that there is a growing number of Ghanians settling in the West and the Global North.

Sensing a good sizable market for fufu, some manufacturers had made it possible to have it in powdered form. Every individual may now enjoy the traditional food without having to sweat by pounding the starchy food into a smooth dough.

Fufu is not just part of a tradition. It is worthy of being part of one’s daily meal, for it is highly packed with nutritional value. Since it is basically from cassava, yam, and other starchy food, it is rich in fiber, potassium, contains vitamin C, Riboflavin, thiamine, and niacin. Eating it may also help reduce inflammation and promotes digestive health.

Are you looking for the best African and Nigerian Cuisine in NYC?

Challenge your taste buds with Divine Flavored Catering‘s wide range selection of African cuisine particularly Nigerian food at great prices in New York City. We have menus for events of all sizes from our Mini Catering Menu to our Main Catering Menu. You can also enjoy our Restaurant Menu and Food Truck Menu!  If you have any questions please feel free to call us at (718) 451-6330.

How to eat healthy

The world is so busy nowadays that people find it difficult to eat healthy. Most people just grab junks on

The Nutritional Benefits of Okra soup

Okra is a flowering plant that is known for its edible seed pods. It belongs to the same plant family

Beans are seeds generally known as legume, pea or bean family. They’re an affordable source of protein, fiber, iron and

Subscribe to our newsletter and never miss our latest update and exclusive offer.

We use cookies on our website to give you the most relevant experience by remembering your preferences and repeat visits. By clicking “Accept All”, you consent to the use of ALL the cookies. However, you may visit "Cookie Settings" to provide a controlled consent.
Cookie SettingsAccept All
Manage consent

This website uses cookies to improve your experience while you navigate through the website. Out of these, the cookies that are categorized as necessary are stored on your browser as they are essential for the working of basic functionalities of the website. We also use third-party cookies that help us analyze and understand how you use this website. These cookies will be stored in your browser only with your consent. You also have the option to opt-out of these cookies. But opting out of some of these cookies may affect your browsing experience.
Necessary Always Enabled
Necessary cookies are absolutely essential for the website to function properly. These cookies ensure basic functionalities and security features of the website, anonymously.
Functional
Functional cookies help to perform certain functionalities like sharing the content of the website on social media platforms, collect feedbacks, and other third-party features.
Performance
Performance cookies are used to understand and analyze the key performance indexes of the website which helps in delivering a better user experience for the visitors.
Analytics
Analytical cookies are used to understand how visitors interact with the website. These cookies help provide information on metrics the number of visitors, bounce rate, traffic source, etc.
Advertisement
Advertisement cookies are used to provide visitors with relevant ads and marketing campaigns. These cookies track visitors across websites and collect information to provide customized ads.
Others
Other uncategorized cookies are those that are being analyzed and have not been classified into a category as yet.
SAVE & ACCEPT